The League supports Millbrook Mental Health Unit, Mansfield Community Hospital and King's Mill Hospital, channelling funds to them from its charity shops in Forest Town and Sutton. As well as its charity shops the League also raises funds through its many fundraising activities.

The League of Friends (Mansfield & Sutton) have donated £44,500 to purchase a Fibroscan which will be used for liver fibrosis & cirrhosis diagnostics. The items were presented by charity trustees to Consultant Sara Benfield & the Divisional Team. 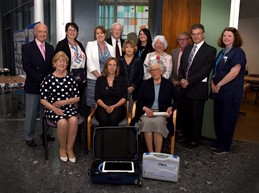 The League of Hospital Friends attended King’s Mill Hospital to hold a handbag and Jewellery stall. Volunteers Kath Smith and Deidre Fisher are pictured with the stall which raised £336. 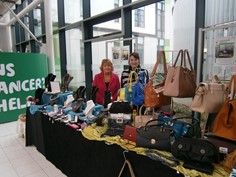 Officers of the Charity are:

You may want to sponsor an activity or provide finance for a particular department which has helped you or a family member or friend. If you would like to help and support our work, further information can be provided by contacting: