NHS Excellence Awards: Who will you nominate as your Sherwood Forest Hospitals hero? 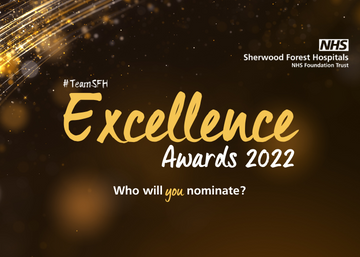 Members of the public who have received treatment at Sherwood Forest Hospitals over the past year are being invited to nominate staff for special recognition from today, as part of the Trust’s annual Excellence Awards.

The plea is being made as the Trust which runs King’s Mill, Mansfield Community and Newark Hospitals today opened nominations for its annual People’s Award category which gives members of the public a unique opportunity to publicly thank staff for their dedication and commitment.

The People’s Award is due to be one of 18 awards presented at the Trust’s annual Excellence Awards event, which is due to be held as a virtual celebration of NHS staff and volunteers on Friday 7 October.

The annual ceremony, which is funded entirely thanks to contributions from generous corporate sponsors and charitable donations, aims to celebrate the Trust’s army of staff and volunteers – including everyone from doctors, nurses and surgeons to porters, cleaners and other support staff.

The public ‘People’s Award’ aims to recognise their efforts over the past year, including for their work during the pandemic to keep essential services running, reduce waiting times and continue to provide the best possible care to patients.

The Trust’s Chief Executive, Paul Robinson, said: “Colleagues across our NHS have been working hard throughout the pandemic to keep essential services running and to provide the best possible care for patients.

“So much of their work goes on behind-the-scenes, so this is our opportunity to really celebrate their work and all that they have achieved.

“We would love for the patients and local communities we serve to join those celebrations by putting forward their nominations for my colleagues who they think have gone above-and-beyond the call of duty and who they think deserve special recognition.”

The People’s Award gives members of the public a unique opportunity to nominate staff for recognition, with the award attracting dozens of nominations each year.

Nominations can be put forward to recognise any individual, department, team or project connected to Sherwood Forest Hospitals, with the winners due to be announced at the virtual celebration in October.

Nominations can be made via the Sherwood Forest Hospitals website – www.sfh-tr.nhs.uk/excellence – before the deadline of midnight on Sunday 21 August.

Paper nomination forms are also available on request by emailing sfh-tr.communications@nhs.net or by collecting from the main receptions at the Trust’s King’s Mill and Newark Hospitals.

Completed forms can be posted to the following address and forms must have been received by the same deadline in order to be considered:

For more information about the Trust’s staff Excellence Awards and to make your nomination, please visit www.sfh-tr.nhs.uk/excellence