The type of test used by a clinician to assess a child's hearing is much dependent on their development age. Behavioural tests require the child to be awake and are carried out as the child gets older, using toys and listening games. 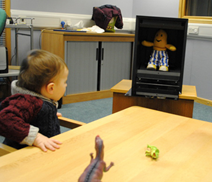 This assessment technique is used for babies/children who are developmentally aged between 6-30 months. The test technique takes advantage of children’s early development of sound localisation. A sound is played via a sound source, such as a loudspeaker or headphones and the child localises the sound. Once they have localised the sound, the child is rewarded with an animated toy. The Audiologist will initially condition the child to the game to ensure they can complete the task. The intensity (loudness) of the sound is then varied to determine the quietest levels your child can detect, at varying pitches (frequencies) which are important for speech understanding.

This assessment technique is used for children who are developmentally aged 24+ months. The test technique allows your child to interact with the Audiologist and makes the assessment into a game. The child will be presented with a sound and asked to complete a task in response to that sound, such as placing a man in a boat or a toy apple in a box. The Audiologist will initially condition the child to the game to ensure they are able to wait for the sound. The intensity (loudness) of the sound is then varied to determine the quietest levels your child can detect, at varying pitches (frequencies) which are important for speech understanding.

Your Audiologist may have suggested preparing your child for this test by introducing “Ready, Steady, Go” games at home prior to their appointment. Using the same principle, as a parent you can say “Ready, Steady, Go!” and on ‘Go!’ encourage the child to complete a task, such as throwing a block into a box. This introduces the child to the concept of waiting for a stimulus before completing a task. Praising the child for getting it right reinforces and encourages the response and makes it fun.

This form of testing can then be built on to allow testing of children using headphones, using the play to form their response to sound stimuli played to them in this manner.

Speech Testing
We can also test a child’s ability to hear and process speech sounds. This may involve asking them to pick out toys or repeat sentences in a quiet or noisy environment.