Tales from the day the NHS began 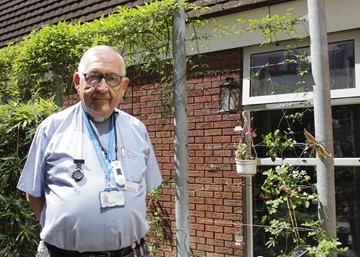 Sherwood Forest Hospitals Chaplain, Rodney Warden, 74, remembers clearly the day the NHS began, as his younger sister had just been born. His parents used to line money up (two and six pence) on the top of their fridge to pay the doctor for the holster milk and orange juice they needed for his younger sister, but once the NHS came into being, Rodney was allowed the money as spending money as the family no longer needed it. “It made a huge difference to our family” he says, as “it was a lot of money back then and could easily provide two family meals.”

He added: “When the NHS was created my family couldn’t believe that they didn’t have to pay to see the doctor any more, they really were amazed, as before they had often dealt with illnesses on their own rather than going to see the doctor, as it was too expensive.

“I remember being a very sickly child, as I was affected with bronchitis two or three times a year and the doctor used to come running down the street to see me. On one occasion I had to go to the hospital by ambulance and be kept in isolation, as my breathing had got so bad. Before the NHS this would have cost my family a lot of money, and I don’t know what would have happened, I would have probably just been looked after at home and my family would have hoped that I would be alright.”

Rodney has been an NHS chaplain for 53 years and says that it has changed considerably during this time, he remembers in his first role where his supervisor said that he was only allowed to talk to patients who he was ‘paid to speak to’ which meant the patients who were not Church of England worshipers. Now he says “We speak to everyone regardless of their religion and we are able to spend more time with patients than when I first began my career.”

When asked about his most memorable times in the NHS, Rodney said: “One of my most memorable moments was when I was contacted by the hospital where I had my first chaplaincy. It had been about 12 years since I had left, but unfortunately one of the patients that I used to see had died. They contacted me because the only thing of significance that they could find in her belongings was a piece of paper in her wallet that had my name on it. She had kept it all that time. I remembered her well as I visited her for about three years on and off whilst she was a patient. I attended her funeral, as she had no other family and I will always remember that.”

“I’ll also remember the first maternity service that I set up for Mums to give thanks for their baby. It was hugely popular and I’m really glad that we set it up. Now of course it is whole families who give thanks, as the fathers are much more involved in the births than they used to be. I can remember when they were made to stay outside of the delivery room. Things are much better now and far more inclusive.”

Talking about his role in the NHS Rodney said: “To start with my chaplaincy roles were an exclusively religious function, whereas now, we are really part of the hospital and we get involved in a lot more. We act as an advisory service as well as a religious one. We are always here for our patients to listen to them, we often sit with anyone who may be lonely, as well as performing the more religious tasks if patients need us to.”

He talks fondly of his twenty years with Sherwood Forest Hospitals adding: “My time at King’s Mill Hospital has been the best years of my life. It is a good hospital which provides a good service. I have been a patient here myself four times and they looked after me so well.”

Rodney added: “All I can say is thank goodness for the NHS and long may it live.”