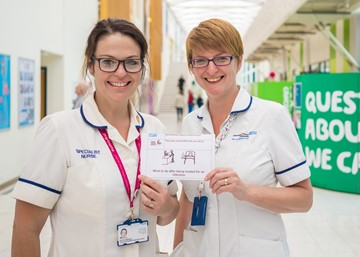 Nurses from Sherwood Forest Hospitals will be working with people in the local community with learning disabilities this World Sepsis Day to raise awareness of the life-threatening condition and infection.

World Sepsis Day takes place every year on 13 September and this year nurses at Sherwood Forest Hospitals will be visiting Mansfield and Ashfield Day services to talk about infection, prevention and how to spot the signs of sepsis. This follows a recent Learning Disabilities Mortality Review (LeDeR)* which highlighted that for people with a learning disability, infections and sepsis are the biggest cause of early death. Out of 1,311 deaths of people with learning disabilities, one out of 10 was related to sepsis.

Sepsis usually occurs when the body is fighting an infection and happens when the body’s response to an infection injures its own tissue and organs. Last year, doctors and nurses at Sherwood Forest Hospitals’ three hospitals (King’s Mill Hospital, Newark Hospital and Mansfield Community Hospital) treated more than 1400 people for sepsis. Sepsis is preventable and can be treated if diagnosed early enough, but timing is crucial, which is why it’s so important that people know how to spot symptoms.

Sherwood Forest Hospitals’ Lead Sepsis Nurse, Paula Evans, who is one of the nurses that will be speaking to people with learning disabilities and autism on World Sepsis Day, said: “We wanted to do something a little bit different this World Sepsis Day and the most recent LeDeR report is evidence that sepsis and infection is playing a big part in the early death of people with learning disabilities and autism, so these groups are a very important audience.

“Sepsis and infection can affect anybody, but it is particularly important that we engage and raise awareness of it with people with learning difficulties as they can often miss vital signs, which affects how quickly they can be treated, or miss taking prescribed antibiotics when they have an infection putting them at greater risk of getting sepsis.

“The aim of our visits is to help people understand and gain more knowledge about how to prevent infections in the first place and then how to spot the signs and symptoms of sepsis developing. We will be talking to users of the day centres, carers, families and anyone who will listen and hope that they find it a fun, interactive roadshow.

“As a Trust, we have worked incredibly hard over recent years to improve safety around sepsis and reduce the number of related deaths and we are now one of the best performing hospital Trusts in the country for sepsis management. It’s important that we take this work further and try and raise awareness as much as we possibly can both in the community and around the country.”

Learning Disability Specialist Nurse, Ruth Harrison, will be joining Paula ‘on tour’. She added: “We’ve been doing a lot of work recently looking at how we care for and support people with a learning disability, autism or both when they come into hospital and we feel that taking this out into the local community is important too. Not only does it raise awareness of sepsis and prevent unnecessary early death, it also helps to prevent admission to hospital, which isn’t always an easy adjustment for people with a learning disability or autism.

“We have also produced an easy read leaflet about sepsis, which can be easily understood by people with a learning disability. It gives advice on how people can look after themselves if they have an infection, how to take antibiotics properly, spotting the signs of sepsis and when to seek more help if they don’t get better. This has also been made available across the East Midlands region for hospitals, clinics and primary care centres to use, meaning that everyone in the area has access to the same information.”

Current performance indicators show that Sherwood Forest Hospitals is one of the best-performing hospital Trusts in the country for diagnosing and treating patients with sepsis and has been recognised in a number of awards, including HSJ Awards and Patient Safety Awards, for the work that has been done.