At the age of 30, having a stroke might not be the first health concern that you have on your mind, but thanks to his partner thinking FAST, 30 year old 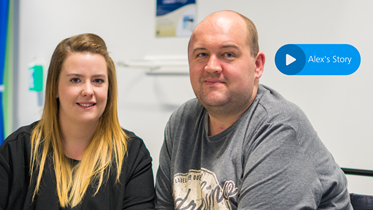 Alex Winfield from Forest Town, is now recovering from the stroke that he unfortunately experienced in July this year.

On World Stroke Day (Monday 29 October), in his own words Alex explained what happened: “It was just a normal Sunday evening and I was getting ready for work when I felt unusual and I couldn’t lift my arm. I called to my partner, Natasha, who did the F.A.S.T (face, arms, speech, time) test on me by trying to get me to smile and when I couldn’t she know something was wrong.”

Alex’s partner Natasha Henson said: “I knew immediately that something wasn’t right with Alex and I remembered the think F.A.S.T adverts, so tried to get him to move his arm and smile. When he couldn’t I rushed him into King’s Mill’s A and E.”

Alex was admitted onto the stroke ward at King’s Mill Hospital straight away, but unfortunately deteriorated overnight and had to be rushed into Nottingham’s Queens Medical Centre for emergency surgery. He thankfully came through this though and was then transferred back to King’s Mill Hospital, where he spent 25 days in the intensive care unit and was then moved to Ward 53 to start his rehabilitation.

Alex said: “I can’t remember much before I was on Ward 53, but once I was there I was put through a lot of intense therapy, they really pushed me, but it has worked, as two months ago I couldn’t even hold myself up, but now I can stand, my legs are more mobile and my speech has improved a lot. It has been really difficult at times, but thanks to the hospital teams and the support of Natasha, I realise how lucky I am to still be here.”

Natasha added: “It was so hard watching Alex in intensive care, but we can’t thank all the staff enough for their support and amazing care. They have always gone that extra mile, giving emotional support as well as physical, not just for Alex, but for me too. They somehow made an unbearable situation bearable.”

Alex is continuing therapy on a weekly basis at King’s Mill Hospital and says he “can’t wait to start walking” having taken his first steps in his latest therapy session.

For the third quarter running Sherwood Forest Hospital’s stroke team has remained in the top ten in the country for delivering stroke care. The team is top in the East Midlands for recognising and treating patients who have had a stroke and has the seventh highest score in the country out of 140 Trusts, after being giving an A rating by the Sentinel Stroke National Audit Programme (SSNAP).