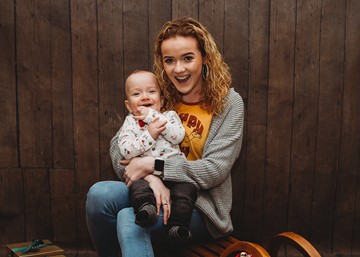 Christmas is a special time for any new parent, but for those that find themselves spending their baby’s first Christmas in intensive care it can be a completely different experience. This is the situation new mum Chloe Parkes found herself in last year with baby Lucas.

Born 12 weeks early and weighing little more than a bag of sugar, baby Lucas is all set to spend this Christmas at home, after leaving King’s Mill Hospital’s Neonatal Intensive  Care Unit (NICU) on Christmas Eve last year, leaving mum Chloe with little time to prepare for the festive season.

Lucas, now 14 months old, was born by emergency caesarean section on 27 October 2017 when Chloe, 20, from Alfreton, was just 28 weeks pregnant. She said: “I noticed that the baby wasn’t moving around as much as he had been and after spending all night awake worrying, I plucked up the courage to call my midwife, who advised that I should go into hospital to get checked out. My mum took me in and we found out that the baby had something called Amniotic Band Syndrome. I was taken straight to theatre and Lucas was delivered weighing a tiny 2lb 4oz.”

Amniotic Band Syndrome is a rare condition where strands of the amniotic sac separate and entangle digits, limbs or other parts of the foetus. When Lucas was born he had bands around some of his fingers, his toes and round his leg. Surgeons were able to save his toes and leg by removing the bands and leaving behind just scarring, but two of his fingers couldn’t be saved. He was also born with chronic lung disease, an eye disorder known as Retinopathy of Prematurity (RoP) and Hypospadias, which affects the development of the genitals.

Lucas was born at City Hospital in Nottingham before being transferred to King’s Mill Hospital’s Neonatal Unit so that Chloe was close to home and her family and friends could visit Lucas easily.

“He was really tiny when he was born and it was a scary time with him having such a rare condition. I had never even heard of it,” said Chloe. “He spent the first two months of his life on a ventilator on the neonatal unit, had to be operated on to remove the bands from his limbs and he also had laser eye surgery to correct his vision at just a few months old. It’s such a lot for a tiny baby, but he really has been a little miracle.

“I definitely wasn’t prepared for him coming so soon. One minute I was enjoying pregnancy without any worry and the next Lucas was here! I hadn’t even collected his pram!”

After two months on the unit, against all odds Lucas was able to go home on Christmas Eve. “It was hit and miss whether Lucas would be home for Christmas,” said Chloe. “Some days he was doing well but then other days he would take a few steps backwards. I really wanted him home for Christmas and the nurses did say he might be ready to go home in time, but I really didn’t want to get my hopes up and I just wanted the best for him.

“In the end we did manage to get home for Christmas, but it was quite late on Christmas Eve so I hadn’t done any planning. My mum got him a couple of teddy bears as a present, but I spent the day just in the house in a daze trying to get used to having him at home.”

Lucas has now been at home for almost year and is thriving as well as starting to walk. Now, this Christmas is going to be very different as Chloe and Lucas prepare for a Christmas surrounded by family.

Chloe said: “This Christmas is going to be extra special having Lucas at home properly. He’s so alert now and has grown so big so seeing him open presents and get excited will be amazing. We’ll be spending the morning at home opening presents and then going to my mum and dad’s house in the afternoon for dinner, where I’m sure Lucas will be well and truly spoilt. I’m just looking forward to a proper Christmas now with my little boy.

“The nurses and doctors on the unit at King’s Mill Hospital were amazing last year and made our time there special, but there’s nothing like being at home at Christmas. I’m grateful for everything they did for us. The unit became our little NICU family for a while and being with other parents going through the same thing was helpful as you always felt like you had someone to talk to.”

Matron for neonates, children and young people at King’s Mill Hospital, Rachel Barker, added: “So many babies on the Neonatal unit do spend their very first Christmas with us and we try to make it special for the babies and their families. We were pleased that Lucas was well enough to go home just in time for Christmas last year, but I’m sure Chloe, Lucas and their family will really make the most of their first proper Christmas at home this year and it’s wonderful to hear that he’s growing so well.

“There are new parents on the unit at the moment whose babies will be spending their first Christmas with us, but I hope Lucas’ story reassures them and gives them hope for the future. Being on the unit at any time of year can be difficult for new parents, but we know Christmas is especially difficult for them. We’ll do what we can to make all the babies’ first Christmas extra special.”