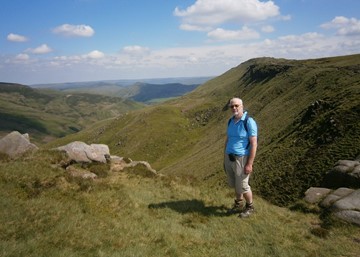 A Sherwood Forest Hospitals governor is helping to raise funds for the King’s Mill Hospital Gamma Scanner Appeal by putting on his boots and walking almost 30-miles – and the public are being encouraged to join him!

Keith Wallace, who is the hospital’s Governor for the Mansfield area, will call at all three of the Trust’s hospitals during the sponsored walk, which will take place on the 70th birthday of the NHS on Thursday 5 July. He will start in the morning at Newark Hospital, making his way to Mansfield Community Hospital before finishing at King’s Mill Hospital in Sutton in Ashfield around 12 hours later.

Keith, who is a qualified walk leader and runs the local On Your Doorstep Walking Group, is hoping to raise more than £2,000, which will go towards helping the Trust to buy a new gamma scanner to help diagnose illnesses such as cancer much more quickly.

But you can get involved too! The walk has been broken down into three 10 mile sections so that the public and hospital staff of all abilities can join in. You can either walk the full distance, or just one of the sections.

The appeal, which is being run by the hospital’s charity, aims to raise £550,000 over the next 12 months to fund a new gamma scanner with CT scanning technology for the nuclear medicine department at the hospital. It will enable more than 2,000 patients each year to have advanced scans and revolutionise how they are diagnosed and treated.

Over the next 10 years, cancer, heart, urology and many other patients are expected to benefit from the new high-tech scanner that will show how the body and its organs function, as well as produces images of inside the body by combining the technology of both a gamma scanner and CT in a single scan. This will reduce the number of scans a patient might have to have and speed up diagnosis and treatment time.

Keith said: “The NHS 70th birthday is a fantastic opportunity to do something big and mark the occasion, but also to raise awareness and some money too for the gamma scanner appeal. I’m a keen walker and so decided to mark the occasion by walking from Newark Hospital to King’s Mill Hospital in one day and to collect sponsorship for it. It means walking an average of 2.5 miles an hour for 12 hours – definitely doable!

“I’m also inviting the public to get involved, walk with me and gather their own sponsorship for this really important appeal. By separating the walk into three sections, it means it is suitable for all abilities and it would be fantastic seeing people walking alongside me for our local hospital, even if for just some of the way.

“I’m a qualified walk leader and lead walks with lots of people several times a week so I’ve made sure I have chosen a route that is safe so that more people can get involved.

“As a Trust Governor, I know that Sherwood Forest Hospitals is already better than most comparable Trusts in areas such as Stroke treatment and waiting times but we want to do more; the new gamma scanner will allow the doctors and nurses to not only save more lives but also improve the health and wellbeing of thousands of people in the mid-Notts area.”

Community Involvement Manager at Sherwood Forest Hospitals, Tracey Brassington, added: “We are incredibly grateful to Keith for approaching us with this absolutely fantastic idea and we really do hope that as many people and local businesses get involved on the day. It’s a double celebration with it being 70 years since the NHS started and because we know that we can raise lots more towards our big gamma scanner appeal.

“I would encourage as many people as possible to get behind this event as not only will we be raising lots of money for an important cause but I’m sure it will be lots of fun too,”

If you would like to take part in the walk, you can contact the hospital’s Community Involvement Team on 01623 676011 who will be able to give you more information and send you a sponsorship pack. You can also sponsor Keith via his Just Giving page: https://www.justgiving.com/fundraising/Gamma-Scanner-Appeal