We are no longer accepting visitors to our hospitals.

A loss or change to your sense of smell or taste

Members of your household will also need to stay at home for 14 days.

Do not go to a GP surgery, pharmacy or hospital.

You do not need to contact 111 to tell them you're staying at home. 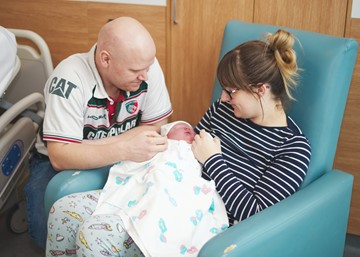 New mums have rated King’s Mill Hospital as the best hospital in the East Midlands for giving birth, as well as the best in the region for the staff that helped them to deliver their babies, according to a recent patient satisfaction survey.

New data from the Care Quality Commission’s (CQC) national survey of maternity experience shows that Sherwood Forest Hospitals, which runs King’s Mill Hospital, is the best performing Trust in the local area when it comes to women giving birth (joint with United Lincolnshire Hospitals) and joint best for maternity staff.

Some of the areas that the hospital scores highly in include the promotion of skin to skin contact after birth, partners being able to be involved in the birth as much as they want to be, and staff treating new mums with respect and dignity during the birth and speaking to them in a way that they understand.

The survey also asked new mums how they felt about the antenatal and postnatal care they received. Women were particularly impressed with the way they were given time at antenatal check-ups to ask questions and discuss their pregnancy and their ability to be involved in making decisions about their care. Once their baby was at home, new mums reported having confidence in the midwives that visited.

The national survey asked 17,611 mums across the country who gave birth in February 2018 about their experiences. The data covered 129 NHS Trusts and a total of 93 responses came from women who had given birth at King’s Mill Hospital.

New mum Samantha Appleby, 32 from Tuxford, gave birth to baby Seth today at King’s Mill Hospital. She praised the hospital and its staff. She said: “My whole birth experience has been a positive one at King’s Mill Hospital. As soon as the baby was born I was strongly encouraged to have skin-on-skin contact, which is important, and all of the staff that we encountered have been reassuring throughout. My partner Dan was also encouraged to be involved at every part.”

Samantha’s partner, Dan Cupit, 30, was at Sam’s side throughout the birth. He added: “It was important to me that I was involved in the birth and I was able to encourage Samantha as well as get involved in supporting her in different positions, which helped to keep her calm. I was also given the opportunity to cut the cord which made me feel involved as sometimes dads can feel a bit helpless when it comes to the birth.

“All of the staff we have encountered whilst we have been here have made us feel very welcome, they have all introduced themselves, spoken to us kindly and have been reassuring. It’s also been nice how staff have spoken to me too and explained what is happening, rather than just to mum.”

Deputy Divisional Head of Nursing and Midwifery at Sherwood Forest Hospitals, Penny Cole, said: “We’re very proud to have been recognised as one of the top Trusts in the region for giving birth and that it’s based on feedback from our new mums. The care that we provide to women and their babies, and the experience they have while giving birth with us, is very important to us and these findings are testament to the hard work and dedication of our maternity team.

“It’s important to us now that we look at the findings in detail and celebrate what we are doing well, but also looking at where we haven’t scored quite as well as we would have hoped and put improvements in place to ensure that we’re giving new mums, their partners and babies the best experience possible.”

Details of the survey can be found on the CQC website.