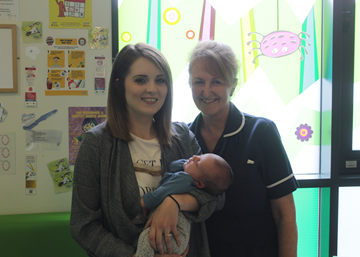 A new baby is an exciting time for any grandparent-to-be, but it’s an extra special time if they get to participate in the birth of the baby themselves. This is exactly what happened when Community Midwife at Sherwood Forest Hospitals, Julie Shaw, was visiting her son and his partner at their home in Mansfield.

Beth Islip, 25 from Mansfield, was four days overdue with her second baby when she started to notice lower abdominal cramps and wondered if it was the start of contractions. She called Julie, her partner’s mum, to ask if the pains sounded like the start of labour and Julie offered to stay overnight and look after their daughter in case Beth and her Partner Lee Shaw had to hurry off to hospital.

Julie arrived at Beth and Lee’s home in Mansfield at around 11pm on Monday 10 June, but it was clear that they wouldn’t make it to the hospital in time to give birth to the baby as Beth’s waters broke and she had an immediate urge to urge to push. At this point, Julie called her colleague and Beth’s Community Midwife, Jill Kingswood, and asked her to come over with gas and air. By the time Jill arrived, and within 13- minutes of Julie’s arrival Beth had given birth to her new 8lb 9oz baby boy, Alfie, and had him cradled safely in her arms.

Julie said: “When I arrived at Beth and Lee’s home I was really surprised to see that Beth had gone from cramps just minutes earlier to having the urge to push! When her waters broke we knew there was no time to get to the hospital so I called Jill for gas and air as requested by Beth. By the time Jill arrived, Beth was pushing and she gave birth to baby Alfie in her living room without any pain relief.

“I was only meant to be going to look after my granddaughter, Evie, in case Beth and Lee had to go to hospital during the night but as it happened I ended up being present to witness the birth of my grandson! It was such a lovely, magical moment to be there for the birth of my own grandson and together I hope that myself and Jill made Beth and Lee feel very safe and special. Everyone I have met said that ‘this was meant to be’ and I believe that this really was meant to be as I was on holiday the week before, on Alfie’s due date.”

Beth added: “It was such a special moment having Alfie’s grandma deliver him. When I was having my daughter, Evie, I tried not to ask Julie too many questions as it was her first grandchild and I really wanted her to enjoy the experience as a grandparent rather than a midwife, but I’m so pleased she ended up delivering my second baby, Alfie in our home. It was all very surreal. Julie and Jill left around 2.30am and I spent my first night with my new baby in the comfort of my own home. Having a home birth wasn’t something I had considered beforehand, but I wouldn’t have had Alfie’s birth any other way.”

Julie and Jill were able to carry out all after care at home for Beth and Alfie so they didn’t have to go into hospital. Evie slept through the birth and met her baby brother Alfie the next morning.

Julie has been a midwife at Sherwood Forest Hospitals since 1984 and has been present for the birth of hundreds of babies in that time, but assisting Beth with the birth of her own grandson is a birth she will never forget.