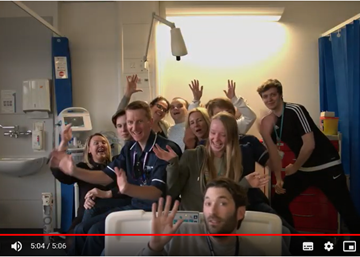 The community is being helped to recognise the signs of infection and sepsis in people with a learning disability and help prevent potentially avoidable deaths, thanks to a creative video produced by hospital nurses and college students.

The Lead Sepsis and Learning Disability nurses from Sherwood Forest Hospitals and media students from Vision West Nottinghamshire College joined forces to create the video, which shows some of the softer signs of deterioration that a person with a learning disability may show.

A recent report by the University of Bristol showed that respiratory infections and sepsis are the top causes of death in people with a learning disability. Many of these deaths are avoidable if the person, their paid carers or families are fully informed in an accessible format about these conditions.

Sepsis is when the body’s reaction to an infection damages its own organs and tissues. The video shows a student from the college who has autism acting out some of the symptoms that may show in someone who has a severe infection or sepsis. It is being promoted today by NHS England and is available nationally for use throughout all areas of health and social care to help the wider community.

Specialist Lead Nurses at Sherwood Forest Hospitals, Paula Evans and Ruth Harrison, said: “We know that there have been cases across the country that could have been avoided had people had access to information around spotting the signs of sepsis and being confident enough to escalate their concerns. We have worked together alongside other external agencies to produce accessible information and video learning about sepsis and infection, to increase the community’s awareness. By raising awareness around this, across the country, in an accessible way, we hope to see a decline in these avoidable deaths nationally.”

The college’s employability and work placement co-ordinator, Julie Hough, said: “It’s been a huge privilege for the students to be asked to be involved in such an important project.  Not only have they been able to implement their new acting, filming and editing skills, but they’ve increased their own knowledge of a healthcare setting and reaching out to vulnerable members of the community.

“Throughout the project we’ve seen great strides in their confidence, team-working and attitude towards work as well as real enthusiasm in producing this film for the hospital. We’re all really delighted with the final edit and hope that it goes a long way to helping others.”

The video can be viewed here.