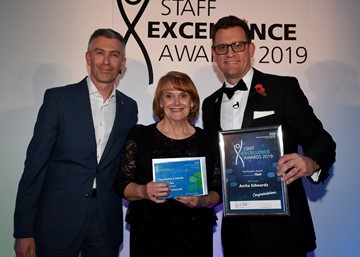 An activities coordinator who works on the stroke ward at King’s Mill Hospital and always goes the extra mile has picked up an award at Sherwood Forest Hospitals’ annual Staff Excellence Awards after she was nominated by a patients’ family member.

Anita Edwards was awarded The People’s Award, which was nominated for by members of the public and patients. It was one of 19 awards that were given out on Friday evening to staff who work at King’s Mill Hospital, Mansfield Community Hospital and Newark Hospital to celebrate their achievements and dedication to delivering outstanding care and service to patients.

Anita was nominated by Kate Phillips, whose mother suffered a stroke and was under Anita’s care at King’s Mill Hospital over her birthday. In her nomination she described Anita as someone who ‘never fails to raise everyone’s spirits by creating a fun and lively environment’. She said: “Anita creates opportunities for patients to join in individually and in groups, whether it be blow drying their hair or running their lunch club or games. Everything is tailored to the likes and interests of the patients on the ward at the time.

“Anita discovered a lady had her dominoes with her and this quickly ended up being a game the whole bay joined in with, keeping the patients entertained. If it’s a patients birthday, she’ll arrange a pamper session for them.

“It can be a difficult time for relatives and often frightening and uncertain, but the little pockets of normality that Anita is able to bring into their days is hugely appreciated and well worth the recognition.”

Anita said: “I was absolutely stunned when I was announced as the winner. I haven’t the words to explain how I feel! It was quite unexpected as I just do what I do in my role, but it makes me feel proud and it’s lovely that a patient’s family member took the time to give feedback and make a nomination. It’s an amazing feeling for any member of staff to receive this kind of feedback, never mind win an award!”

The Chair of the Trust also presented a special award to an overall winner and this went to the Street Health team at the Trust for their work around taking compassionate care to some of our most vulnerable patients living on the street. They also won the Aspiring and Improving Award.

The awards ceremony, hosted by Chief Executive Richard Mitchell was held at the John Fretwell Sporting Complex in Mansfield on Friday 8 November, and saw staff from all parts of the Trust, along with some of its valuable volunteers, being recognised.

Chief Executive, Richard Mitchell, said: “I was delighted to host this year’s Staff Excellence Awards. Nights like these always make me incredibly proud of the Sherwood team and I am pleased we are able to celebrate our many outstanding colleagues.

“We have had another fantastic year thanks to the hard work and dedication of colleagues. Thank you to all our colleagues and volunteers at Sherwood.

“We received more than 500 nominations this year and inevitably only a small number of people could make the final shortlist, but everyone nominated should be extremely proud. This demonstrates yet again what a great team we are already, and what really excites me is our commitment to making further improvements to patient care and the way we support each other. I am confident 2020 will be an even better year at Sherwood.

"I would also like to recognise the many colleagues who were working on the evening of the awards, like any other night, to keep our hospitals and patients safe and who could not make the awards. Thank you.”

It is with thanks to sponsors that the event could be held: Sherwood Forest Hospitals Charity, Medirest, CNH, Skanska, Perfect Ward, University of Derby, Touch Design and Vivup.