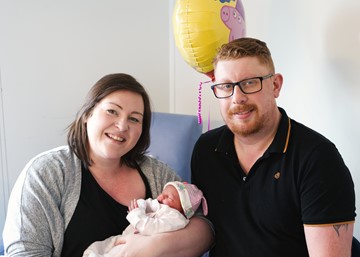 New mums have praised King’s Mill Hospital for the care they received during the birth of their baby, according to a recent patient satisfaction survey.

Some of the areas that the hospital scores highly in include the promotion of skin to skin contact after birth, partners being able to be involved in the birth as much as they want to be, staff treating new mums with respect and dignity during the birth with clear communication and the cleanliness of the room and ward.

The survey also asked new mums how they felt about the antenatal and postnatal care they received. Women were particularly impressed with the way their decisions to feed their baby were respected by midwives and once they were home they felt that they had enough information to contact a midwife or health visitor and were asked by their midwife about their mental health.

The national survey asked 17,151 mums across the country who gave birth in February 2019 about their experiences. A total of 86 responses came from women who had given birth at King’s Mill Hospital.

New mum Emma Evans, 29 from Sutton in Ashfield, gave birth to baby Rosie on Monday (27 January) at King’s Mill Hospital. She praised the hospital and its staff, saying: “My whole birth experience was amazing. I think communication is so important and this was something that the midwives were really good at. I know that they’re very busy but the care I have had at King’s Mill Hospital has been completely person-centred and consistent and even just the small things, like being checked on, make a difference.

“For me, my journey didn’t start when I came in to have Rosie, it started months before as I am diabetic so have regular ante-natal counselling and the Specialist Midwife that I see at those appointments even delivered Rosie, which made the whole experience even more special and emotional.

“Skin to skin was definitely something that was important to me and I did it with my previous baby. It was very much encouraged by staff, but I was asked if it was something I wanted to do and it was never just assumed.

“My partner, George, was also completely involved in the birth and was able to stay with me from the beginning when I was induced. It’s really important that partners are involved and staff communicated with George, explaining what was going to happen next and why. This was vital as I think it can be easy for partners to panic when they don’t know what’s happening but the way the staff addressed him and communicated put us both at ease.”

Acting Divisional Head of Nursing and Midwifery at Sherwood Forest Hospitals, Penny Cole, said: “We’re very proud that feedback from our new mums shows that we’re doing well as a Trust when it comes to maternity and having their baby with us. The care that we provide to women and their babies, and the experience they have while giving birth with us, is very important to us and these findings are testament to the hard work and dedication of our maternity team.

“It’s important to us now that we look at the findings in detail and celebrate what we are doing well, but also looking at where we haven’t scored quite as well as we would have hoped and put improvements in place to ensure that we’re giving new mums, their partners and babies the best experience possible.”