From 1 January 2022, we have taken the difficult decision to suspend adult in-patient visiting in order to help protect our vulnerable patients. Please visit here for more information.

As we continue to see a rise in our urgent care admissions, a surge in admissions of Covid positive patients, and workforce shortages created by Covid isolation, some appointments for planned care may need to be delayed.

We will continue to prioritise urgent and emergency care and cancer treatments and we will do everything we can to avoid delaying care. If we need to take the difficult decision to delay appointments, we will contact affected patients directly to let them know.

If you do not hear from us, please attend as requested in your appointment letter. 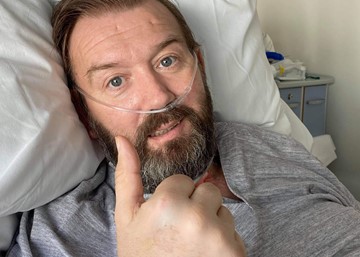 King’s Mill Hospitals’ longest Covid-19 critical care patient has finally left the unit after a 115 day stay, leaving no other Covid-19 patients in critical care for the first time since March 2020.

George Paterson, 54, from Mansfield, was filmed by staff, who were clapping and cheering, as he was transferred from critical care to a ward, after first being brought into the hospital with Covid-19 in February.

Since coming to King’s Mill Hospital by ambulance after a week-long illness that saw him take to his bed, George tested positive for Covid-19 and has spent 115 days in critical care. During that time, his wife Tonia and two daughters were told on more than one occasion that he might not make it, but each time he continued his fight and is now recovering on a ward.

George’s wife, Tonia Paterson, said: “After a week of George being in bed unwell, I knew something wasn’t right and suspected Covid-19, but he kept telling me that he felt fine. I rang NHS 111 and they sent an ambulance and the paramedics said that his blood oxygen was very low and he had to go to hospital. George was reluctant to go, but I remember the paramedic telling him that if he didn’t, he could die. That was the last time that we saw him for a long time. I honestly thought that he would be taken in, treated on a ward and back home fit and well within a couple of weeks. Never in my wildest dreams did I imagine that he would still be in hospital now.

“Unfortunately, that wasn’t the case, and George was taken to critical care and put into a coma. From then on, things were really up and down.”

After one month on the critical care unit, Tonia received a call in the early hours of the morning – a call that nobody wants to receive about a loved one - telling her that George had deteriorated and may not make it. With PPE provision in place, Tonia and their two daughters, who are 17 and 24, were able to visit George.

“All I kept thinking about before seeing George was whether it would look like him as we hadn’t seen him in so long. But the nurses were fantastic and I spent time talking to him at his bedside and I told him that if he had anything left to please keep fighting for us, but if he can’t find the fight anymore we’ll be okay and he could go,” said Tonia.

A few hours later, after kidney dialysis treatment because his kidneys were starting to fail, George’s oxygen levels and condition began to improve. But, even then, hospital doctors were unsure if George would make a full recovery, especially as it is also believed that he suffered a stroke whilst in a coma and the effects of that on him were unknown until he was awake.

In April, George was brought out of the coma and with hospital rules around visiting starting to be relaxed to one visitor for an hour each day, Tonia was able to start visiting George daily.

“It was great to be able to start seeing George more regularly again, but as he started to wake up, he was very confused, which I expected, although he did always know who I was, thankfully.  A speaking valve was fitted and he started to talk again, which was really nice as we could have conversations again.

“Throughout all of this, the staff at King’s Mill Hospital have been fantastic, from the nurses and doctors to the liaison officer who was always there to help me see and speak to George from home, and the cleaners and hostesses who made me drinks.”

On 10 June, 115 days after first arriving in critical care, George was moved to a ward, which is a major step in his recovery as he can now breath on his own. It’s still unknown how long he will be in hospital for, but he is getting better by the day and benefitting from physiotherapy support.

Tonia said: “We don’t know how long it will be until we get George back home, it could be six months, it could be as long as 18 months, but he’s coming on leaps and bounds every day and I’m starting to get glimpses of my George coming back, especially his sense of humour.

“I can’t thank all the fabulous staff that have been involved in his care enough. I honestly thought that I would be planning George’s funeral. His recovery will take as long as it takes now, we’re just taking it day-by-day, but we’ve got time, he’s here with us and that’s a blessing.”

Debbie Jackson, one of the sisters on the Critical Care Unit at King’s Mill Hospital who cared for George, added: “It was a very emotional time when George moved from the critical care unit, after so long there with us, to a ward. It’s been a long journey for George and his family, and he will still be recovering on a ward for some time, but it’s a step in the right direction.

“It’s always amazing to see any patient leave critical care and on their journey to recovery. We devote so much time to caring for patients like George, with the ultimate aim of getting them strong enough to recover at home or on a ward, so when that happens it’s heart-warming and rewarding to see. We all wish George a speedy recovery so that he can return home to be with his wife and two daughters soon.