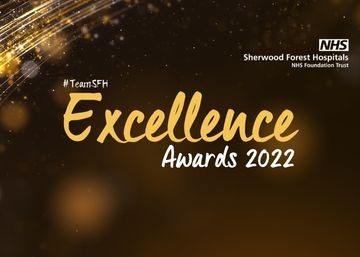 Sherwood Forest Hospitals Trust is pleased to announce the shortlist for its staff Excellence Awards.

The annual awards, which are funded entirely thanks to contributions from generous corporate sponsors and charitable donations, aim to recognise the efforts of the Trust’s army of staff and volunteers over the past year. This includes their work during the pandemic to keep essential services running whilst continuing to provide the best possible care for patients.

One award is the People’s Award, which is kindly sponsored by Mansfield and Ashfield Chad. It gives members of the public the opportunity to thank individual colleagues or teams working across the Trust’s three hospital sites for their dedication and commitment.

Rachael Parr was nominated for going ‘above and beyond’ in her job as a Health Care Assistant in the Emergency Department. A patient’s family member commented that Rachael: “Went out of her way on several occasions, and her acts of kindness truly helped my uncle.”

The Daycase Unit received several nominations, with the general consensus being the team’s ability to provide an excellent service under extreme pressure. Of the nominations, one said: “The team has worked extremely hard during the recent bed crisis. They have worked together to still give all patients the best care possible, and patients did not suffer from any neglect of care during these busy times.” Another comment stated: “Everyone is friendly and welcoming, and they work together helping to maintain patients’ dignity, choices and understanding.”

Anne Kabia, Elective Care Matron, says of the team’s nomination: “Wow, what an honour to be nominated for this award. I feel that staff really go above and beyond for the patients, and they are a credit to the NHS. It is amazing that patients take time to nominate us, and the team would like to thank all those who went out of their way to nominate us for this award.”

Finally, the Midwifery Team were shortlisted for their exceptional, patient-centred care as well as their calm, caring approach. One patient comment said: “Their love of supporting women shines through. They have the ability to read the atmosphere and have known exactly when I've needed reassuring words, a back rub or simply just knowing that they're there in the background.”

Lisa Butler, Deputy Head of Midwifery is extremely proud of her team for receiving multiple nominations and said: “Our Midwifery Team has been working so hard during the pandemic and beyond, so to see their efforts recognised so widely is a credit to the team. They are all so deserving of this nomination.”

A total of 18 awards will be presented at the virtual celebration of NHS staff and volunteers on Friday 7 October. The Trust received more than 250 nominations across 18 award categories.

Multidisciplinary Team of the Year Award

Team of the Year Award

Individual of the Year

The People's Award sponsored by The Chad

Freedom To Speak Up Champions

Volunteer of the Year sponsored by the Newark Advertiser

Fundraiser of the Year

External Partner of the Year

The Chair Award will be presented to an individual or team on the night by the Chair of Sherwood Forest Hospitals Trust, Claire Ward, in recognition of their outstanding service to the Trust.